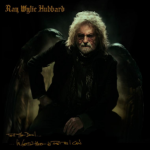 Album: Tell the Devil I'm Gettin' There as Fast as I Can

The rebellious sons were born from the tears of the gods

He is still on his knees outside the raven witches house

Treachery befell the oldest son before the sails were tacked

Mocked by his captors, he died loyal to his gods

Refusing to confess, he recited Genesis 4:15

An Asia Minor poet who was loyal to the sons

His gods had been exiled; he vowed to avenge the disgrace

As he drew his dagger he cried out “How does gold taste?”

Unworthy to wear jewelry, the whore queen dressed in jade

Born under the seventh sign, her sins can’t be forgiven

She betrayed the sons in the Sicilian vespers war

Covered in ivory she was as false as Constantine’s donation

Destiny cannot be bribed as proven by the death of Achilles